Dusky Seaside Sparrow – The rarest Race of All

As far as we know, there are no dusky seaside sparrows (Ammospiza maritima nigrescens) left in the wild, and as there is only one male left in captivity the race must be the rarest in the world and doomed to extinction. The dusky is one of nine races or sub-species of seaside sparrow, all found in the USA, inhabiting Atlantic coastal marshes from Massachusetts to Texas.

Up to the 1940s the number of duskies on Merritt Island, Florida was estimated at about 4,000, and a few miles to the west thousands more thrived in the marshland of the present-day St. John’s National Wildlife Refuge. Then, in the mid-50s, disaster struck: Cape Canaveral and the NASA Space Center across from Merritt Island were being developed and Merritt Island was dyked for complete mosquito control, stopping the tidal flooding of the marshes, something the duskies needed for survival.

Thus many sparrows were sacrificed to man’s conquest of the moon. At the time one local newspaper suggested that a sign be posted at the John F. Kennedy Space Center, proclaiming ‘Welcome to Cape Canaveral, home of the successful moon shot. We also sent a bird farther than that.’

In 1975, five female dusky seaside sparrows with young and 47 males were counted on the St. John’s Wildlife Refuge, the females being much more secretive and rarely heard. But in December of that year fire destroyed the habitat and not another female has been seen since.

When the population dropped to just six males in 1980 five birds were captured and confined to two federal cages while various experts argued about the best course of action. The International Council for Bird Preservation called upon the US Fish and Wildlife Service and Florida Freshwater Fish and Game Commission to perpetuate the race by breeding the five captives in repeated back-crosses with females of the closely related Scott’s seaside sparrow (A.m. peninsulae).

In this, the ‘pure’ males would mate with their own hybrid young and after only three generations of back-crosses, the resultant offspring would harbour 94% of the genetic makeup of the dusky seaside males. When released back to the St John’s River Refuge these would stand virtually as good a chance of survival and increase as the original stock.

The Government spent from 1971 to 1979 buying up 6,250 acres on Florida’s east coast to create the St John’s River Refuge for dusky sparrows (Florida then being third among US states, after Hawaii and California, in having the most endangered species).

The cross-breeding scheme had many opponents who said that a 94% cross was not the ‘real thing’. Supporters pointed out that it made no sense to speak disparagingly of hybrids between sub-species, for intermediates could occur naturally anywhere in a species’ range. The duskies shared a common gene pool with other sub-species and mating between them had undoubtedly taken place.

Unfortunately, a US Department of Interior solicitor ruled that anything less than a 100% dusky was not a dusky and did not qualify for the expenditure of federal funds under the Endangered Species Act of 1973, the source of most funds previously expended on the bird. 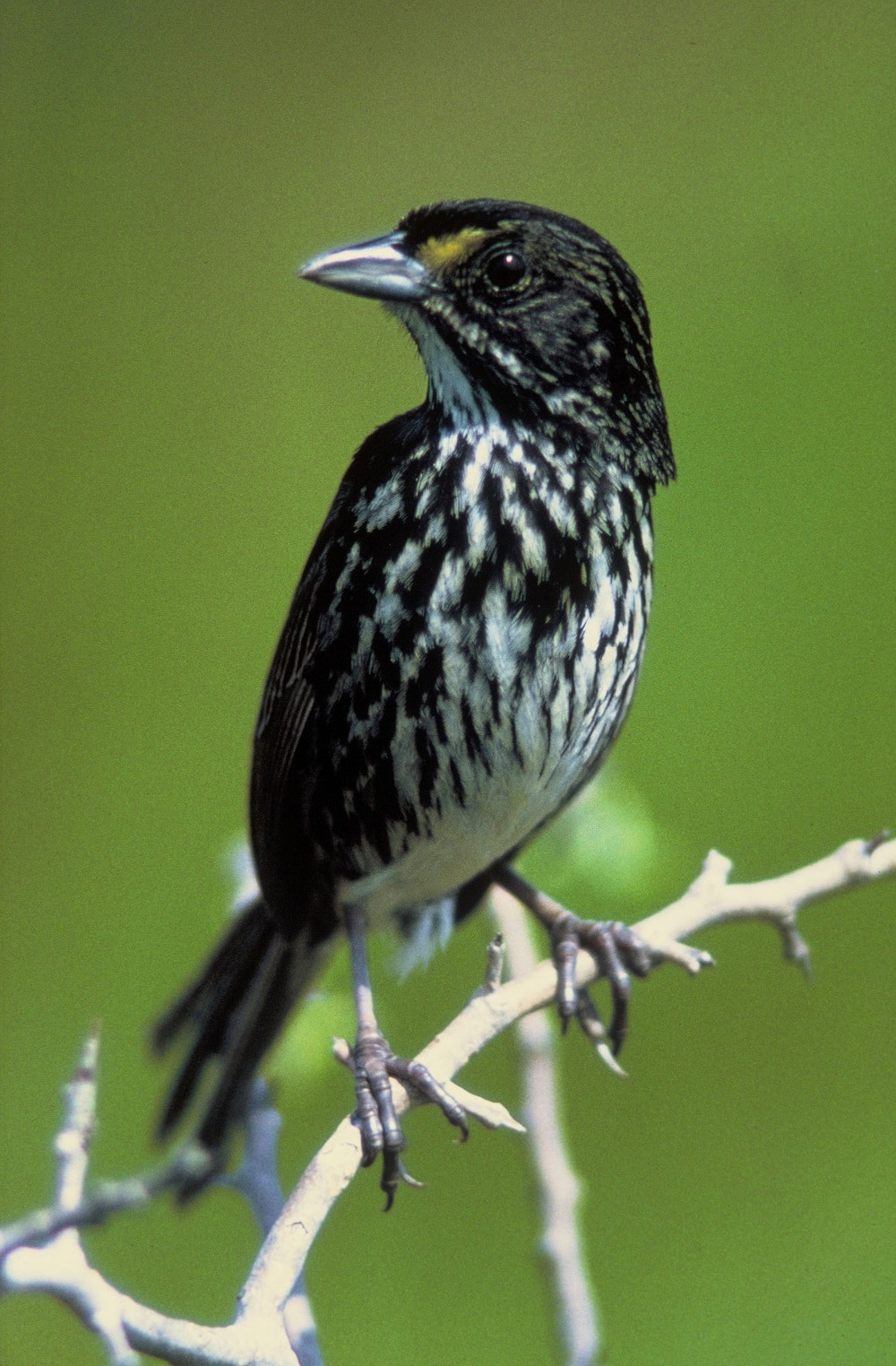 Eventually, the release of the birds back into the wild was abandoned and the 28 g (1 oz) birds with a life expectancy of nine years entered a committee-organized breeding project. They were kept at Disneyworld’s Discovery Island in a habitat that closely resembled their natural home.

In October 1986, just one 100% dusky seaside sparrow called ‘Orange’ remained alive and it was already over 10 years old. Pure dusky ‘White’ died earlier that year. But also at Disneyworld, there were five birds with dusky genes as a result of hybridization with females of another subspecies from Florida’s west coast, including a 75% dusky male and females with varying dusky genes of 25-88%.